Everyone has a vested interest in the health of the EVE Ecosystem. Since 2019, much effort has been put into strengthening the foundation of the Ecosystem. As a result, one of the key victories is that ISK generated by botting has been reduced by 80%. In 2019, during the biggest actions against botting, there was a noticeable reduction in concurrent player numbers. Now, concurrency has more than fully recovered but instead of bots we have a host of genuine new players taking their first steps in EVE alongside returning veterans. A substantial portion of the EVE Development team is working hard on embracing these new players (and significant headway has been made, which will be discussed at a later time), and in addition, a consistent cadence of updates has been established, focused on core gameplay resulting in a more dynamic meta-game/balance. There is work ahead and continued progress to be made.

In this blog you will find information on what the road ahead looks like for the EVE Ecosystem.

The Ecosystem segment was formed during the re-organization of EVE Development in Q4 2019 and given the responsibility of monitoring and aligning all balance, progression, economy and other health-related features from a macro-economic perspective.

The Quarterly Player Survey asks players to agree or disagree with topic statements so that that they can be prioritized and addressed. Here are are some of the topics with the lowest approval ratings, and therefore, the highest priority.

2. The EVE Ecosystem Health and Prognosis

The current health of the Ecosystem can be measured across these 3 main categories, and they have each been assigned a simple health state (AAA. A, B, C and D) and a trend (Improving, Stable, Worsening). A handful of Health Indices have also been defined to guide the prioritization and focus while listening to the community.

It is a complex and challenging situation that is being managed and decisive action will be taken to benefit the long term health of the Ecosystem. 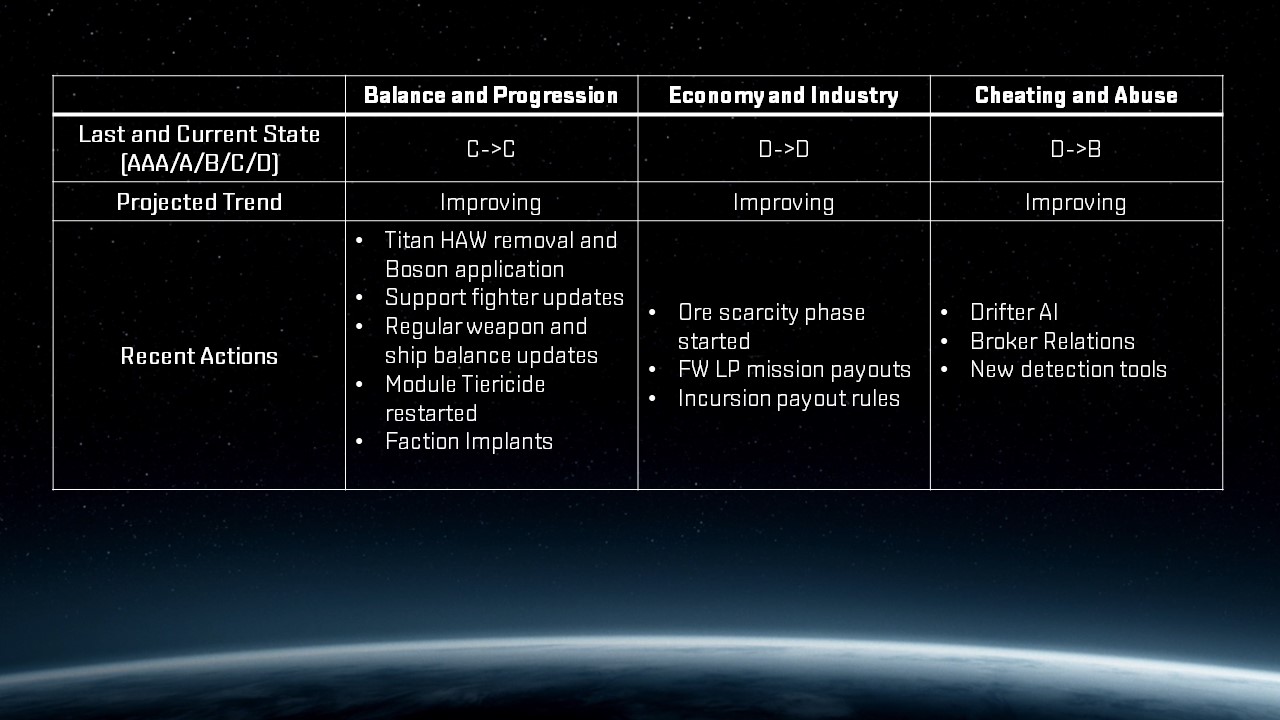 A long term roadmap has been established, taking into account community and CSM input, and the following changes will be implemented in the coming months. 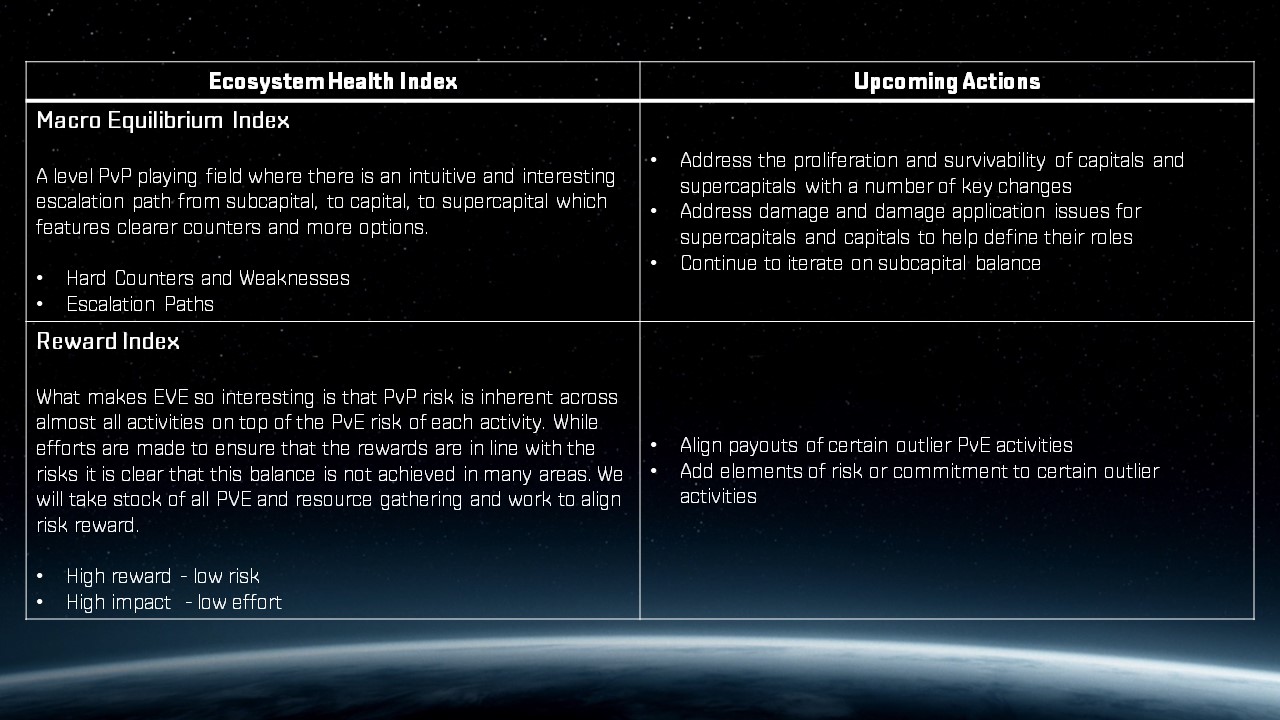 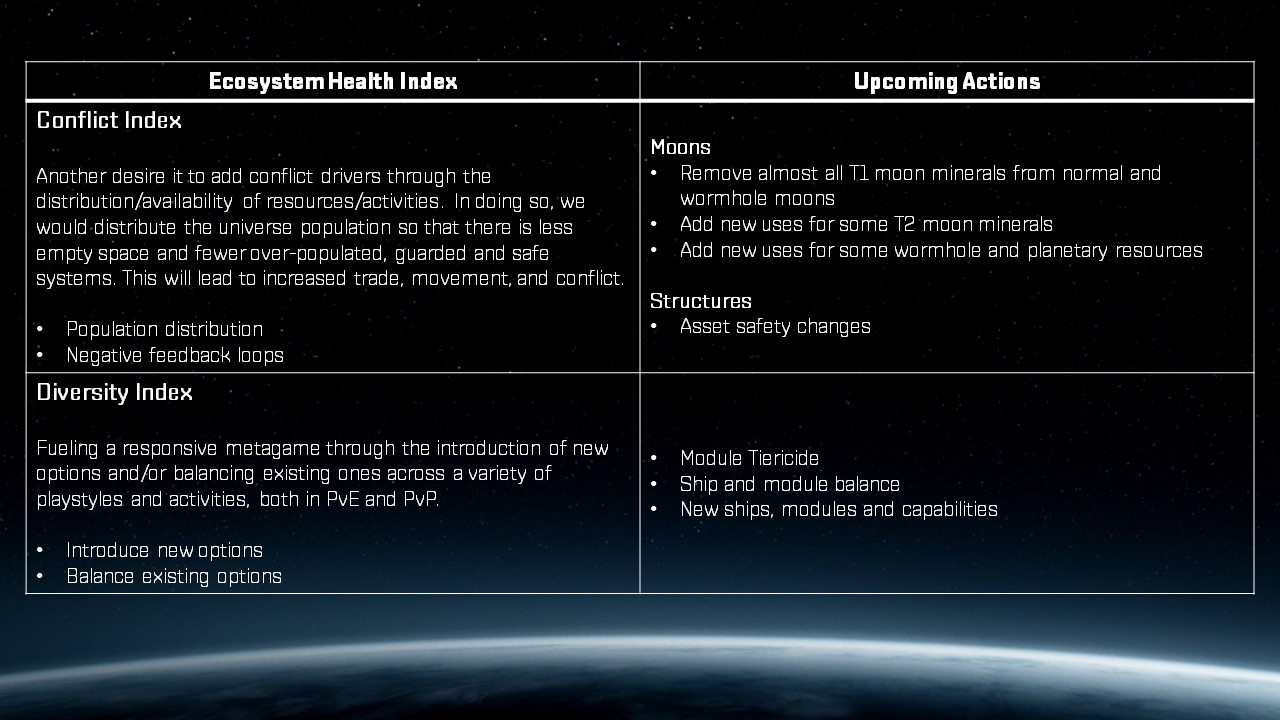 As announced recently, New Eden is entering a period where resource distribution is being re-balanced. It has been decided, in cooperation with the CSM, to give an update on how and why this decision was made. As detailed above, it was concluded that the economy of EVE is in an unsustainable state. A healthy economic environment where players can find opportunities by making interesting choices is the goal. One of the key pillars of EVE is that loss has meaning and a state is being reached where loss is not meaningful anymore for veteran players.

It is imperative, both for EVE's success and for the well-being of its inhabitants, that the economy resides within a healthy state.

Defining that is a massive undertaking as the ‘healthy’ state is not static. It changes constantly, depending on numerous variables such as the number of participants (number of players) and their profession (type of gameplay).

If global income is presented as a line (below), it can be seen that there is an equilibrium range (changes slowly) where there's a healthy state, and at the moment, it is much too far to the right on this line (higher income).

Waiting longer to address this imbalance will mean a worsening of the situation. Therefore, a bold plan is being put in motion so that even more drastic measures are not required in the future.

The three phases of that plan and their respective goals in the Resource Distribution process are as follows:

The main goal of the Shortage Phase is to get the economy to the left side of the "Healthy State" on the income line. Even though it is a moving target, there is confidence that the data and tools to evaluate the situation (and then move on to the second phase) are in-hand.

In this phase, the location of the Healthy Range limits will be declared, and then the necessary changes to place the income within that range will be made. As it is not a static state, there are many moving parts and attributes that establish this range and their relative contribution.

With the findings of the Redistribution Phase, it will be possible to create a dynamic system that self-regulates and adjusts accordingly, based on player inputs and universe outputs.

At CCP, the Trifecta of Cheating is defined as - Account Hacking - Illegal Task Automation (a.k.a. botting and input broadcasting) - Fraud (credit card theft)

According to the quarterly player survey, botting remains the key issue for a large majority of players because it is the most visible to players of all cheating methods. However, all cheating undermines the hard work of honest players, and RMT ISK is supplied through all of these three avenues. Therefore, all must join forces and stop buying illegal ISK and not condone any botting.

Since a task force was created almost a year ago, a real and measurable win in the war on Bots has been reached. For security reasons, the details on how this was achieved cannot be divulged here, but investigation tools have been improved, and there are plenty of further ideas to implement. There is a zero-tolerance policy on bots and until that goal is reached, no one will rest.

Player reporting has been a huge success because of the positive feedback loop implemented last year, where everyone who reported a character that ended up getting banned, got a thank you email. In many cases it has not been possible to turn these around within a single day. Keep those reports coming and remember, no one is banned on reports alone.

Even though visible botting still exists, you can rest assured that the combined effect of the strategy of high value targeting and organization takedowns has reduced the impact of botting on the Ecosystem by 80% since the same time last year. This includes both the number of suspected botters and the wealth generated by botters.

Since the same time last year, there has been great success in eliminating thousands of accounts over the last year. This is noticeable in server load, especially during the Blackout, which seems to have struck a crippling blow to botters, who consequently left the game in droves. Since then, the player population has swelled while botter numbers continue to decrease.

We have began a huge undertaking with a lot of moving parts and hope that the above sheds some light on our plans and initiatives. We are completely aware that these changes are part of the greater EVE Ecosystem and we need to act with care. We are confident that the work ahead will lead to a healthy ecosystem for everyone, where player choices matter and loss has meaning.

If you would like to discuss this blog, please head over to official thread on EVE Online forums.