Type DeadSpace
Target Kill all NPC's
Steps 1
Mission briefing Yes, the interrogation went well. We managed to extract out of him who he was working for. Apparently he had been contacted by an agent from the Komni, a criminal organization which has been making quite a name for itself recently in these parts, and paid a vast sum of money to kidnap our CEO's niece. A foolhardy task, but he did manage to pull it off and transfer her into the hands of the criminals.

Also the data disc you transported in your last mission has revealed even more to us. It contained the precise meeting points between the kidnappers and the Komni agent for the past few weeks, as well as the exact coordinates for the next meeting which is to take place any minute now. I'd like you to fly over there yourself and ambush the Komni goons at that location. Try to be quick, I don't know how long they will stay there waiting for their contact to arrive. 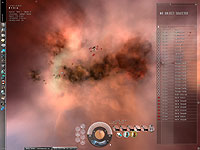 Grimmjsb
Mesa,AZ
11:51am 2006 Thursday 28th December 2006 THe cal navy version is vs darkonnen even has a overlord veterans and gangleaders.
Kaljostro
12:08am 2006 Wednesday 6th December 2006 Gallentean version against Maru, same spawn as mentioned by Tattoo Face. Maru Harbinger dropped an Ocular Filter Basic (+3 Perception) the second time now, so it's no random drop. Structures without loot.
legendofbedwyr
6:14pm 2006 Monday 23rd October 2006 in amar version silo droped some ammo.
Tattoo Face
9:37am 2006 Wednesday 13th September 2006 The Minmatar version of this is against the Maru and they are all in one group and all attack straight away.

No loot found and I destroyed everything :(

No structures with loot.