Type DeadSpace
Target Destroy all NPC's
Steps 6
Mission briefing We've been gathering information from our agents within the Cartel to prepare ourselves for a possible attack on our assets. So far we've found out that they are planning a major offensive against a target within *** today. The target still remains unknown to us, but we managed to discover the meeting point of some of their forces. I want you to gather all the help you can muster and fly out to the meeting points and deliver a devastating blow to their fleet. That should deter them from any attack inside Yria, and send them a message they won't forget.

Just don't forget what you're up against. We have no idea how many ships are out there, all we know is where 5 of their rendezvous points are. Destroy any and all targets you can find there, then report back to me. If there's too many of em out there, then get some help, I'm sure some of our other agents in the vicinity would be willing to give you a hand. 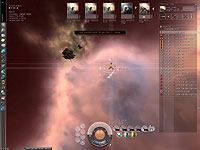 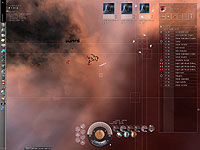 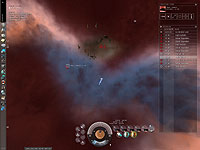 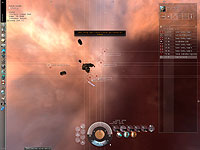 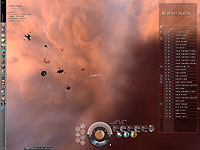 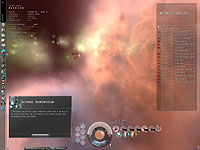 ikserak
9:13pm 2008 Tuesday 10th June 2008 Did it in a Hurricane w/nuclear, fairly easy. Spent a long time taking out the battlestation in bonus room, only to find average loot. I probably spent as much on the ammo it took to destroy it!
Caiden Soul
11:58pm 2008 Wednesday 5th March 2008 This read as a pretty tough mision so I put it off for 2 or 3 days trying to get someone to help me.

I finally just went for it solo in a Ferox (low-medium skills) and had no trouble at all. Room 5 wasn't any harder than the rest either, maybe just took a little longer, not much.

I passed on room 6 due to running out of time (inlaws for dinner) and lost out on most of the salvage in room 5 for the same reason but still thought this was a reasonable paying level 3 mission giving up 11.2 Million isk with mission fee, time bonus, ship kills and salvage of first 4 rooms.

Plenty of stuff in the wrecks too and as good if not better than many other level 3 missions. Personally I hope this missions keeps being offered to me, it's a nice earner and I want a crack at those Battleships next time.

Oh, and it's still pretty much as described as far as ships etc go in the Trinity version.

GamingDaemon
6:05am 2008 Monday 18th February 2008 Just did it for the first time. No silo for me either. Objectives were completed when I killed the boss in room #5. And the drops were nothign special, but I liked the salvage.
Carda
12:54am 2007 Monday 1st October 2007 Well, seems they removed the silo from stage 5 and thus the implants.
I allways like this mission because of it...

I believe they removed if because people were farming it?

The named boss dropped nothing

FlowerOS
11:45am 2007 Monday 12th March 2007 On step 3, Angel Bunker also has loot sometimes.
Amanda Miranda
11:12am 2007 Tuesday 6th March 2007 Don't waste your time on the bonus room, almost lost my Hyperion and for a lousy Gyro Destabilizer I or some such, which is now a few precious minerals. If you do try this one, don't say you were not warned. :P

The rest of the mission seemed fair enough and a great level 3 mission, the Silo had an implant in it, forget which it is, think -3 percent cap on shield remote emissions. Enemies not over-powering like the bonus room.

I purchased 2 extra pallidium tags selling the excess tags for more than I bought the original 3 so loot plus bounties was well worth it.

Brtsk
7:35am 2007 Thursday 1st February 2007 In part 3 of the mission, the Angel bunker structure also has loot, though not much. Loot in the bonus section sucked.
Del369
6:21pm 2007 Monday 22nd January 2007 I just did it now, well after said patch, loots still shit, did get a 3-10 mil hard wiring implant somewhere in it though, but yea, CRAP :P
Xsag
1:24pm 2007 Thursday 18th January 2007 i did this mission last night the types of enemies found in the bonus room where quite different but i was so busy getting pwned i didnt have time to count everything - 2 bs with 700k bounties on them tho
Xsag
2:40pm 2007 Wednesday 17th January 2007 anyone done this since the revelations patch? ive heard they have made various changes.....to alot of missions
Jack Randall
8:25pm 2006 Sunday 24th December 2006 The loot in the bonus stage is a total crap. Random cheap modules.

Blowed up the angel battlestation there (wasting 500+ torps in the process) just to find:

These guys at CCP have an odd sense of humour...

prokonsul_piotrus
6:53am 2006 Thursday 23rd November 2006 Compared to Angel, Serpentis is easy - 3 stages, no spider drones, no 'tricky' stages (but also no good loot structure on last level). See Eve-Wiki for more info.
michaelikina
8:32am 2006 Sunday 5th November 2006 :( was trying to find info on serpentis extra vaganza but all i found was the angel and gurista one's anyone have the serpentis version ???
DOA7791
10:41am 2006 Tuesday 31st October 2006 I thought we were supposed to be able to keep the tag according to many different areas of info that i've read.....but that wasn't the case for me, and after going in w/a gang to the bonus area, i actually lost money by the time i buy the palladium tag again...any ideas..?
SSgt_Sniper
7:01am 2006 Thursday 19th October 2006 Angel Extrav, Guristas Extrav, no Serpentis Extrav? Your missions list seems Caldari based (or biased), btw. Several Gallente missions I cannot seem to find in your lists.
presidente
12:58pm 2006 Tuesday 15th August 2006 Talking about the bonus stage? What have other people received as loot?

In Terzams stash I found a Small Converse I Deflection Catalyzer.... I'm no impressed by this. A difficult bonus stage and all I get is a 70,000 isk item???? Come on!

What have other people found as loot?amax


Loot is bad since the last updates. Even hard l4 like Mordus Headhunters have bad, bad low end loot. Which really sucks because then it's not worth to run those missions with big risks to loose your ship eg.

Presidente
amax
12:46pm 2006 Sunday 30th July 2006 Talking about the bonus stage? What have other people received as loot?

In Terzams stash I found a Small Converse I Deflection Catalyzer.... I'm no impressed by this. A difficult bonus stage and all I get is a 70,000 isk item???? Come on!

Gate 1:
NPC's Atack after warp: yes
Structures with loot: none

Gate 2:
NPC's Atack after warp: no
Structures with loot: Casino