Type DeadSpace (no gate)
Target Kill all NPC's
Steps 1
Mission briefing As I said earlier, something dire has come up. One of our biggest research outposts in Konola has been attacked. Its location is a secret, so someone must have been snooping around, I'll take a wild guess that is was those Thukker mercs you took care of.

We've identified the attackers as agents of the Minmatar - Gallente alliance. They've certainly got balls to get this far into our territory, I'll give them that. But they must be eliminated, before they board the outpost. We'll destroy it before we allow them to get their filthy hands on the technological breakthroughs which our scientists have been researching there.

From the data I've received there is a large force of Minmatar fighters at the doorstep of our research outpost already, fighting their way in. We are expecting two more waves of reinforcements to arrive soon, as we spotted two groups of Republic ships heading their way already. So you must hurry before the reinforcements arrive, or you'll never be able to take them out. 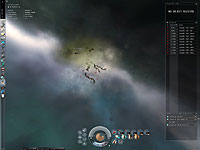 You no longer get 2 stabber spawns. The third spawn now is two elite frigates - olaf and baldur I had. Very high resists to em/therm which as amarr was interesting.

The stabber orbits at 30km - so make sure you have infared or carb lead / iron to hit him.

Arcalane Celso
6:27pm 2007 Tuesday 12th June 2007 Not necessary to kill the Stabber in the final wave. Second wave had no Stabber, and was similar in composition to the first wave. Waves spawned when the last Slashers from the first and second waves were popped.
billysielu
1:50am 2007 Monday 29th January 2007 Republic Fleet Stabber orbits at 30k and goes at about 500m/s.

You're gonna need MWD, a nice weapons range, or lots of patience.