Type DeadSpace (no gate)
Target Kill all NPC's
DropOff 1 Mercenary Pilot (1.0 m3)
Steps 1
Mission briefing Chief Executive Panel surveillance spotted a small team of Thukker mercenaries in Konola, probably up to no good. They're wanted men, and need to be taken care of. I would ask you to bring them in for trial but that really isn't necessary, the exception being their captain. I want him taken alive and brought to me. We'd like to figure out exactly what they've been up to. Your objectives in this mission are not as simple as they sound, however. We haven't been able to locate their captain's hideout yet. but we expect him to show up if you warp to some of his minions which are hauled up in a small asteroid belt in Konola. So I suggest you destroy the first group of mercenaries you encounter as fast as you can, before more reinforcements arrive, or you'll have a heck of a battle on your hands. 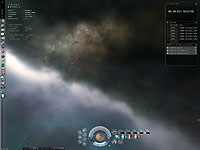