Type DeadSpace (no gate)
Target Kill all NPC's
Steps 1
Mission briefing The Seven have showed their ugly faces again, in ***. They've set up an illegal brothel inside the system, which is being guarded by some of their top pilots, including a member of the Seven's elite circle. I want that place shut down, immediately. Do whatever it takes. 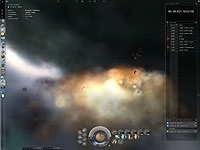 pabich
4:21pm 2006 Monday 16th October 2006 I did this mission three times today. Same agent. Had Sarah, Kruul, and another guy (this one was in a Frig of some kind). Other than that, the mission is the same...
yenexia
2:03pm 2006 Saturday 14th October 2006 I noticed two difference in my mission for Gallente
instead of:
Rogue pirate escort
Kruul

I had:
Rogue Mercenary Thorn
Sarrah


I know that a mission do tend to be a bit different.