Type DeadSpace (no gate)
Target Kill all NPC's
Steps 1
Mission briefing Since you found the acceleration gate in your last mission, I believe you're the most suited to take a look at what's at the other side. I've received reports of Gallente convoys traveling to and from the area you discovered, but never realized there was a connection until your discovery. So this might be a hidden base of some sort, who knows. But it's for you to find out.
When you arrive at the warp-in point after using the acceleration gate hidden inside the anomaly, I want you to neutralize any hostiles you find. I'm especially keen on finding out what these convoys have been transporting, so if you see one then destroy it. I'll send someone else to pick up the pieces after you're done, so don't leave any survivors. 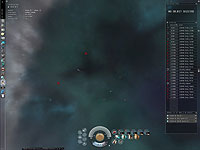 Diverse
1:15pm 2007 Sunday 28th January 2007 When I warped in I was expecting to drop right on top of the acceleration gate but the warp dropped me 124 K away. This took ages and the Vexor had locked me at 68 K. Dropped him with no problems but spent the next 15 mins getting to the gate. Was getting a bit short of time as DT was only 20 mins away but managed to complete the mission, however could not salvage or pick up the loot. :(