Type DeadSpace
Target Kill all NPC's and destroy Lesser Hive
Steps 1
Mission briefing I have grave tidings this time, ***. One of the ancient station ruins out in the fringes of *** has been reportedly infested with rogue drones. They have made it their hive, and are busily producing more and more rogue drones. From there they have been launching attacks on our convoys and outposts nearby, some of which have been totally overrun. I request that you fly to the station ruins and eliminate their hive.

Rogue drones are a constant menace to our assets. They have no allegiance to any nation that we know of and their only purpose seems to be expansion and destruction of anything in their path. Once they have started infesting a system, it is very hard to exterminate the infestation for good. But it is possible to reduce the threat they pose by destroying their hives, fortunately. 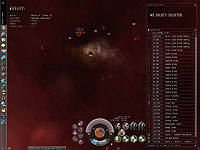 Vitnir Belote
3:10pm 2007 Monday 26th March 2007 Bring a large SB for the scrambling drones.
Himo Amasacia
4:07pm 2006 Monday 25th September 2006 This is easy enough. All you have to do is blow up the hive and leave. Theres some missile battries that fire on you when you warp in, but you can leave them behind. Some drones will agro you as well on the way to the hive. Basicly attack the hive and all remaining drones come after you, but you can warp when its gone. I generallz just kill the controller for its minerals and then leave for another mission, but you can slaughter everzthign else if you wish.