Type DeadSpace
Target Kill all NPC's
Steps 1
Mission briefing We received a report just a couple hours ago from our secret agents that revealed plans by our enemies to make a sneak attack against us in this very system! We believe this plan will take effect in a matter of minutes, as our surveillance teams have spotted a number of their ships mobilizing inside ***. I personally received a message from our esteemed CEO, to send my most trusted contacts against these scoundrels, and so I ask you ***, are you up to it? All I need you to do is infiltrate an areas swarming with the pirates and destroy all of the
hostile ships you encounter, my other clients will take care of the rest. This will hopefully deter them from any further mobilization within ***. 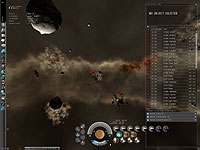 do0m
Carmel, NY
4:21pm 2008 Wednesday 4th June 2008 They also warp scram. Lost a raven because of it. =/
darkd
1:48pm 2007 Saturday 19th May 2007 well i just did this mission and it's has a lot different rats as stated. they do appear with intervals off about 3-5 secs and only closest group attacks. The other 4 groups attack in 2 waves. Entire spawn consisted out off:
BS:
3 Mutant lord
1 plague lord
6 Savage lord
4 Lord
4 Slave lord
Cruisers/BC:
4 Hellhound
4 Fiend
2 Specter
Frigs:
2 Loyal enslac-ver
2 Loyal Minion
2 Centior Devourer
1 Centior Abomination

Xylynex
Perth, Australia
10:03am 2007 Wednesday 4th April 2007 Since the 1.4.1 patch and mission changes, the rats are not there when you first enter. They appear in their groups 1 at a time. I found that 3 Groups will also automatically agro you after a slight entry delay and without shooting. The last 2 attacked when I attacked 1 of the groups.
amax
8:28pm 2007 Saturday 6th January 2007 Just did the mission on my Dominix.

I got in and was aggroed by only *one* spawn. I started getting away from them and got aggroed by another spwan once my drones got too close to them.
diatom
12:30am 2006 Monday 16th October 2006 I was immediately aggro'd. :)
Qinglong
7:36pm 2006 Thursday 12th October 2006 Just had this mission and was auto-attacked on entering the level.Zakgram

Same for me, you should change the datas on the mission section because it is a little bit confusing. Most of the rats target and attack as soon as I arrived there.
Zakgram
12:13am 2006 Thursday 3rd August 2006 Just had this mission and was auto-attacked on entering the level.