Type DeadSpace (combo)
Target Kill all NPC's
DropOff 10 VIP's (30.0 m3)
Steps 5
Mission briefing A few unfortunate members of our corporation were kidnapped yesterday. I have reliable information that their kidnappers are close by. I'll upload the coordinates into your NeoCom, use them to find a series of gateways which should lead you to them. If you find the kidnappers then deal with them appropriately and return their captives to me, dead or alive. If you succeed I will reward you handsomely. This is an important mission, which will have significant impact on your faction standings. 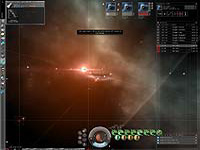 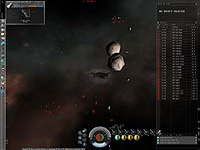 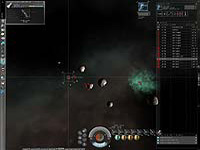 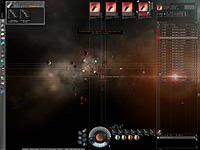 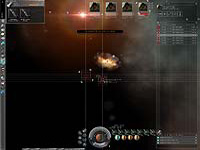 xXStratotankerXx
6:57am 2007 Wednesday 11th July 2007 I'm new to the Eve multi-verse and have only been going now for a little over a month.
I just got this mission and am trying to figure out WHY the game engine would be trying to kill me off before I can even fly a battleship.
I'm doing good to fly a MOA and seriously doubt that I'd stand a snowballs chance in hell of surviving the onslaught of destruction that will befall me during this mission.
How is it possible for a nooblet such as myself to get through all those battleships and cruisers?
Should I just decline and face the ignominy of defeat?
Thanks in Advance!
-xXStratotankerXx
or just Strato for short.


Trelennen
9:39pm 2007 Sunday 8th April 2007 Just a notice for fellow missionners. At stage 3, the group with 3 Ogres wasn't there on warp in, and it spawned after killing one of the 2 Hydras in the 2x Hydra 6x Prophet group (had already killed the other group and started with the prophets, so the trigger might be that only one ship is left).

No worry though, they spawned without aggro, and didn't even aggro the drones that were out.

All in all the mission is not very difficult, the only tricky and annoying part is the stage 4 where you can't use drones without aggroing everything.

Strangely enough the 4 Overlord who aggro after warp didn't web me, and it doesn't seem they scrambled me either (but didn't have to try to warp out, could have tanked them all day long, and the first was down before they got into web range - surely the 30% boost bonus from BS 4 on the mael did help ;)). Then took the group with 2 overlords and 4 Commanders, starting with the Overlords to get them before they get in close range, and unleashed everything and the drones on the last group with the wingmen, no sweat here. In fact commanders did more damage to me as I had only 55% in EM (55/80/70/78) and those things orbit relatively fast outside web range but still too cloose to hit them with 1400s or 1200s. I should definitely have started with them in the second group, and kept the overlord for the end (I even finally aggroed the last group on purpose to launch the drones on them when I had two left, as they stayed over 200m/s transversal @15km and could not hit them, and then took from range the 6 from the last group while tanking those two left and the 4 wingmens). Never went under 50% shield nor 50% cap in the whole stage though.

Last stage was really easy, sentry go down fast, and i could nearly passive tank the Behemoth (fight didn't last long enough for him to put my shield below 31% without boosting, so can't be sure ;))

Did the mission in a maelstrom with XL booster II, boost amp I, 2x Invul II, 1x Thermal Hardener II, 1x Webber (needed for stage 4 as I use artys - 4x 1400 carbine, 4x 1200 proto -, like the thermal hardener - else a kinetic hadener or another invul is more efficient, as they spam kinetic missiles - and didn't want to dock to refit, I'm that lazy), and in low 1x DCU II, 1x Gyro II, 1x tracking enhancer II and 2x PDU II (cap control circuit rig and proj range rig, a second cap control circuit rig for soon). The whole thing took me like 1h30 though, plus time to loot/salvage.

In the end, very profitable mission, with a nice 8.4% faction standing boost :) Took some time to loot and salvage due to the crap load of scrap metal you salvage as well as lots of cap bosoter charges (left 1200 mÂ³ of mainly scrap metal behind, and still end up with over 3k mÂ³ of loot!). Apart from stage 4, salvage is not really valuable, but overall some nice named mods to sell (like 1 arbalest heavy - 13M - and one XR-3200 heavy - 5M -, few 500k worth armor hardeners, prolly around 25M selling all that overall, plus the mineral from reprocessing the crap :)).

Andochas
6:19pm 2007 Sunday 18th March 2007 I nearly lost my ship after launching drones on Stage 4 (Mercenaries). Also, be careful of the EM damage from Mercenary Commanders in Stage 4.

All of the other Stages, I had no problem launching drones after I had engaged aggro on a group. Last stage BS stays at long range (50km).

BarmaLINI
6:16pm 2007 Tuesday 6th February 2007 BarmaLINI : unchanged : revelations patch
Pigasus
3:29pm 2006 Wednesday 27th December 2006 I havenâ€™t done it for a long time now. If I remember correctly at 4th stage you have full + close aggro (~30km).
One of the best ISK/Time mission available.
WardenWolf
11:20am 2006 Monday 25th December 2006 I'm concerned about Step 4. How far are those Mercenary Overlords from you when you warp in? Revelations seems to have seriously beefed those things up. They have the same bounty, but they hit like a 2 mill battleship.
PapaTramp
2:53am 2006 Friday 1st December 2006 Where are the VIPs?
I destroyed last ship and there no VIPs in the loot.Hawkeye


Sounds buggy. Are you sure you are in the 5th room of the mission?PapaTramp


I've found them ;) After this patch i didnt see the cont in the heap of scraps.Hawkeye


Did it drop the VIPs in a normal container, or in a wreck? I've been curious about how mission loot will show up in the new wreck system. Personally I'm not flying another combat mission until I have Salvaging for my looter ship ... just so I don't have to deal with the headachePapaTramp


VIPs were in the standart cont.
Hawkeye
10:49pm 2006 Thursday 30th November 2006 Where are the VIPs?
I destroyed last ship and there no VIPs in the loot.PapaTramp


Sounds buggy. Are you sure you are in the 5th room of the mission?Hawkeye


I've found them ;) After this patch i didnt see the cont in the heap of scraps.PapaTramp


Did it drop the VIPs in a normal container, or in a wreck? I've been curious about how mission loot will show up in the new wreck system. Personally I'm not flying another combat mission until I have Salvaging for my looter ship ... just so I don't have to deal with the headache

PapaTramp
9:17am 2006 Thursday 30th November 2006 Where are the VIPs?
I destroyed last ship and there no VIPs in the loot.Hawkeye


Sounds buggy. Are you sure you are in the 5th room of the mission?PapaTramp


I've found them ;) After this patch i didnt see the cont in the heap of scraps.
Hawkeye
8:28am 2006 Thursday 30th November 2006 Where are the VIPs?
I destroyed last ship and there no VIPs in the loot.PapaTramp


Sounds buggy. Are you sure you are in the 5th room of the mission?

PapaTramp
8:26am 2006 Thursday 30th November 2006 Where are the VIPs?
I destroyed last ship and there no VIPs in the loot.
Hawkeye
9:13pm 2006 Friday 17th November 2006 Personally I use an Exeq with cargo expanders. I fly the first three stages with my rail fitted Mega, then when I go back to refit with blasters, I come out with the loot ship and collect it up. Then wash rinse repeat. As for "crap?" I generally disagree. With a little careful market work in Sinq, Essence, Everyshore, and occasionally Placid (Those named PDUs and RCS especially) ... I *easily* get 20m or more in loot. In Sinq I can usually make 10m right off the bat with buy orders. And then the rest goes up for sale orders. So before you mulch, you need to get a feel for what sells ... cuz great profit is available. So bounties and loot, you're looking at 40 - 50m from this mission ... and then hopefully you get a good implant that sells in the 50m range.
BakyPT
7:43pm 2006 Thursday 16th November 2006 DonÂ´t forget to loot this with an industrial after finishing it. Mostly crap but lots of great refining items. Almost filled my Sigil cargo hold!

Hawkeye
4:08am 2006 Thursday 26th October 2006 Okay, I had this about a week ago, and have it again this week. I fly it in a Megathron with 350mm Protos using AM or Iridium as range requires. The EoM rats are all pretty easy since you can take them in groups. The Merc room is the issue because of the total drone aggro. But the Overlords (Battleships) orbit at 3500m, so for this room to kill the BSes, I fit 7 Mega Modal Ion blasters with AM ammo (My optimal is 3700 or so with this fit) I shred the first 4 BSes, then aggro the group with 2 more. Once all the battleships are gone, I dock and refit with 7 250mm Compressed Coils (Yeah, its sad seeing mediums on a BS, but it works). I then take out the batch of cruisers that were with the last 2 BSes. After that there is just one blob of ships left. That's when I unleash the drones. I use the rails on the cruiser targets and T2 lights on the frigates until they're all gone.

I know its a bit of a drawn out issue this way having to refit several times, but it works quite well when its all said and done. And the almost 19m in bounties is quite nice. And last time I had it, using a mix of existing buy orders and setting my own sell orders, I got roughly 30m in loot. And a +4 Int implant.

Be vary when using drones in room 4 as well, since they might draw unwanted attention.

Finished mission with a Domi with 70/70/80/80 res. 250mm rails and various sets of drones.
Roadkill
2:37am 2006 Saturday 9th September 2006 i just did this mission and at every stage they were frigates
Picman
11:04am 2006 Saturday 2nd September 2006 The mission is still the same. The groups are not connected, so you can pull one spawn after the other. I didn't release drones until I pulled the last spawn in a stage, because i heard bad things about it.

In stage 3 or 4 there are 3 Omber asteroids, some of the biggest I've ever seen. One of them had a radius of 2162 and the same size as the usual Veldspar roids in the belts. As I usually don't have a roid scanner fitted I don't know how many units it contained, but it was really HUGE.

btw.: The mission reward was a +4 implant, but the loot is rather crappy.