Type DeadSpace
Target Kill all NPC's and destroy Blood Raider Cathedral
Steps 2
Mission briefing We have a problem, for the past few weeks the Blood Raiders have been growing increasingly aggressive. They seem to have set up a small base nearby and every few days our convoys, miners and even military personel get attacked. This structure also serves as sacrifical grounds for the Covenant and they believe it to be holy, hence extremely tight security.
My superiors told me to find somebody competent to deal with the threat, and that's why I'm asking you. I suggest you find someone to help you with this, as I fear you will not return should you go alone. 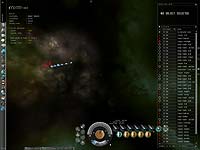 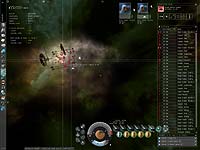 tuea
9:46pm 2007 Monday 18th June 2007 no scramblers on this mission, you do get aggro'd by the entire room on both pockets. On the second pocket if you move above 30km from the missile batteries they stop firing.

There's a reasonable amount of explosive damage on the second pocket, fit for em/therm primarily but don't go without an explosive hardner on an armour tanking setup.

Not a hard mission compared to some and not a great earner either, there's maybe 6m in bounties.

1st spawn was destroyed in few minutes, nothing special, I come in 30+ km from nearest target and just fire :)

-> in 100 sec all was done, 90 sec to destroy Caphedral and mission complete.

Thanl all ppl for help :)

P.S. Nothing special in loot. 10kk for mission (loot, bounty, reward) - no more.

Marshal
10:01pm 2006 Wednesday 8th November 2006 Which setup you used?
As I read at another describe: all ships aggro in one time in 1st and in 2nd pocket? They scramble?
Picman
9:23pm 2006 Friday 1st September 2006 There are no longer 2 Harbingers in the first pocket, but There are 1 Harbinger and 1 Monsignor :D

That differs a little bit, sometimes there are Harbingers, sometimes Monsignores or whatever. The Gistatis are all in Cyclones, that's right. But there is one big mistake that is much more important. None of those Corpus BS, nor Monsignore nor Pope or other BS around there will shoot kinetic cruise missiles on you. They don't use any missiles. Only the Gistatis ships use Havocs.
Brazero
1:50am 2006 Tuesday 29th August 2006 There are no longer 2 Harbingers in the first pocket, but There are 1 Harbinger and 1 Monsignor :D