Type DeadSpace (combo)
Target Kill all NPC's
Steps 3
Mission briefing I've been informed that the settlers, which are still in our captivity, are in fact Federation citizens, or more to the point Roden Shipyard employees. That's all I've been told so far. However there was one item of significance which was retrieved from the Rolette residence by some of our personnel after you cleared the area of hostiles. It is a bookmark to a remote deadspace area in ***. We haven't sent a team to investigate it yet, and I recommended you for the job. You should probably expect a trap to be waiting for you there, considering the situation in Port Rolette, so be well prepared when you make the journey. I wouldn't want you to get hurt. 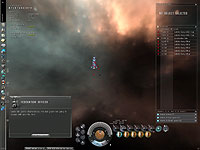 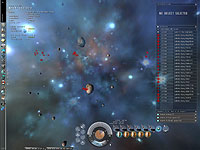 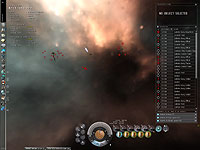 really, the only reason i ask, is because i am slightly worried about the warp scramblers. I don't want to chance my 470mil ISK ship, when i'm a little over 5 months into the game, with a small corporation. ya know?


Rinji
10:28am 2007 Sunday 18th November 2007 Did this with a well-equipped Dom, 79% resists in kin/therm, full set of tech2 drones and equipment. Certainly can solo this, hardest room is #2. Just keep flying away, taking out the nearest ships with the appropriate sized drone. Had to turn on both AR at times (I use 1x med, 1x large) but never had to run.
Rikeka
2:53am 2007 Sunday 12th August 2007 Ok, letÂ´s start the review (Just finished Enemies Abound 3 on my Abaddon, btw, believe it or not, the Abaddon works better than a Raven on this mission, dunno why)

First room:
7 Frigates, 2 diff types. EveInfo is right on numbers and types, but they frigs here do NOT web. Not sure if they scramble. Anyway, they are just 7 fricking frigates...

Second room:
As soon as you enter this room, start aligning anywhere away of all the Gallente scum. YouÂ´ll be first engaged by the Elite dudes, who will call for reinforcements. DonÂ´t panic. Engage the frigs and destroyers first. 4 waves of reinforcements will come, making it close to 40 enemies, I think, on this room.

Kill the elites, kill the destroyers (which are quite slow, so they can be killed by with the turrets, if your drones are busy). There are 2 cruisers who will constantly damp your sensors. They have the Lachesis hull, easy to spot. Kill those quickly (they do have a nice tank, though they end up dying quite fast). There are some Gallente BCÂ´s here, but they are quite weak and slow. Easy targets for turret based chars. Should not pose a problem for Raven fellas, though.

If you have been aligned since the beggining, the battleships should not be a problem. Though I did had to tank 3 or 4 of them during all this, they have pretty shitty tank. Once down, the rest of the battleships are 40/50 away, the gate to th following room was at 70km. Now that you can warp away, do so, and return, will be quite faster than simply slow boating to the gate.

First of all, when you jump to this room, you jump like 5000m from the battleships in the centre. While aligning, target them and destroy them 1 by 1. While doing this, use your drones to kill the frigates here. This frigates are quite strong, they stay at 14/15 km, so I could not web them. They have quite a nice tank too. IÂ´m sure they never webbed me, but dunno if they scrammed me, as I never tried to escape. It may happen that you will kill the 4 BSÂ´s, yet killing none of the frigates. Do not worry about that, take your time with the frigates... because you probably are now entering the zone where the left or right NPC groups are engaging you...

If you done as IÂ´ve told you, only one of these groups will aggro you. Piece of cake. The battleships all seem to like to engage from 17/18km... though IÂ´ve seen one of them firing missiles at me at 50km. Dunno what happened, maybe a bug. I got close, and he never tried to save the distance.

Once the 2nd group is dead, engage the third one. BTW, never fire on the structures. If you do, you probably will aggro the full room (itÂ´s what I did so the battleships of the 3rd group could get nearer)

fyrefyter14
12:45am 2007 Wednesday 1st August 2007 :( The info provided is all worng for the current edition. I lost a nice raven going into this mission based on info provided here. There are multiple federation frigs that warp scramble. Too many to take out with drones alone when solo. Don't attempt this mission solo without help. All ships are federation not gallente.
Xalorous
9:57am 2007 Monday 25th June 2007 Elite Federation Lixa and Lochos, maybe Arcus

scrambling, webbing, and the lixa's call for reinforcements.

Lost a nicely set up Mission Raven to these little beasties
Arashi
11:33pm 2007 Friday 18th May 2007 Cannot give the gist of all types but now different frigate groups and they now attack on warp in
Pigasus
1:22am 2007 Saturday 10th March 2007 So... if you manage to be here, you are not going to have any problem with this one :D

In 2nd and 3nd stages there are lot of ships but are separate in groups and you can easily kill one after the other.