Type DeadSpace
Target Kill all NPC's
DropOff 1 Special Delivery
Steps 1
Mission briefing A couple of bold and extremely dangerous pirates working for the Guristas just ambushed a heavily armed convoy of ours, overwhelming the escort ships in no time. As usual they left few survivors, leaving almost nothing but charred wreckage behind. They managed to fight off the Caldari State officers which immediately arrived at the scene, and are now lurking in an asteroid belt in ***. I want you to go out there and destroy them and bring back the goods which they looted from the convoy, I'll upload the approximate coordinates to your NeoCom if you accept this job. For the sake of those who died in the ambush, show them no mercy ***. 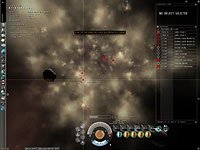 Edit: oh, and the sentry turrets coughed up 70k each.