Type DeadSpace
Target Kill all NPC's
Steps 1
Mission briefing We've detected an illegal settlement in ***. Not only do they not have a permit, they haven't paid their taxes since, well, it looks like they've never had any intention of paying their taxes. We discovered them by tracing a large shipment of ship components and planetary vehicles headed for the *** market to their outpost. I sent a small team of security personnel to evict them but they reported meeting heavy resistance, forcing them to retreat. They nearly lost a cruiser out there ... Considering your reputation, I'd like you to take care of the dirty work. Fly over to the settlement and try to negotiate with them. If they still refuse to leave, you have full clearance to take them by force. 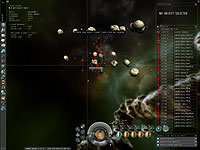 dbunibe
11:26pm 2007 Saturday 7th July 2007 Just got done running this mission and allowed it to respawn to try to get diff aggros.

After you kill the initial BS's (I always ignored the frigs till the end) Target and kill the Orion next. That will agro about half the room including the domi-esk ships.

Rezerwowy_Pies
3:56pm 2007 Sunday 27th May 2007 mission is really easy, more like lvl3 not 4
Toriatrix
3:22pm 2007 Saturday 12th May 2007 there are 4 frigs that warp in, agro just 1 of them and a series of BS and support warpes in, finnish them.
Then agro the 2nd of the initial 4 frigs.
Rinse and repeat.
Launch drones when all the BS are down and all the 4 inital frigs have been aggroed (or fired upon if you will).

lynxair
8:08pm 2007 Wednesday 9th May 2007 Hmmm... I'm thinking of just fitting a Raven with assaults to clear all the frigs first. Or bringing a Drake with assaults for that purpose? Hmmm... Or just jump in in a Condor and try to drag the whole lot away from the roids - I wonder if it'll work... :?
VonHeise
3:57pm 2007 Tuesday 17th April 2007 I'm not sure if they warp scramble or not. I didn't let them get close enough.n00n3r
The frigates with numbers in their name do warp scramble.
(I lost a raven to them.)

I'm not sure if they warp scramble or not. I didn't let them get close enough.

The whole room seems to aggro as two groups. The first group is the 5 frigates and the two battleships (1 domi, 1 mega). After that, regardless of what I attacked, everything came after me. If you release your drones and have them attack a frigate, the frigates will warp scramble the drones allowing you to get out. I have no clue how I'm going to survive going back in there, but I'll find out. :-/
Zsinj
6:41pm 2007 Friday 6th April 2007 had this mission in 0.5 aramachi.
like predicted.

Tipps. dont aggro the frigs that go aggro on you. just take a sb with you as they orbit at 1200-1500m and focus on the 2 bs attacking you. as you would aggro the frigs the entire spawn will lock on you. with sb notkiddow

No. the orbit at 6700m making a smartbomb useless. This is actually an inaccuracy in the description.
Pigasus
10:17am 2007 Monday 26th February 2007 BarmaLINI I think the spawns in this mission are different.

The 1st spawn is OK. And from this spawn I have aggro after warp in the stage.

The 3nd spawn I think should have the:
1x navy Orion
2x navy Dominix
5x navy Officers
I always take aggro from this group when I shoot one of the officers or the Orion.

cant see any frigs "surrounding the acceleration gate leading to the room" in our mission DB ...

you have list of groups with types of NPC's ? or screenshootBarmaLINI

Revelations Patch 1.3 removed the Frigates surrounding the acceleration gate leading to the room.BarmaLINI

cant see any frigs "surrounding the acceleration gate leading to the room" in our mission DB ...

you have list of groups with types of NPC's ? or screenshoot
Major Stallion
2:19am 2007 Wednesday 7th February 2007 BarmaLINI : unchanged : revelations patch BarmaLINI

Revelations Patch 1.3 removed the Frigates surrounding the acceleration gate leading to the room.
BarmaLINI
5:53pm 2007 Tuesday 6th February 2007 BarmaLINI : unchanged : revelations patch
Buddha
6:16am 2006 Tuesday 19th September 2006 I just finished this mission and found that if I launch drones, all the groups aggro as well.
Meishu
4:21am 2006 Sunday 17th September 2006 for the Miners under us... as I m too :)

so... if you wanna mine this treasure.... make sure you start the mission far before DT!!! and if possible take some corp buddys with you. Think about the needed time to get down the missions rats too (take me 2 hours with looting and all)

As it is a 1 Step mission, you have to complete them before you can mine... (I don t wanna mine with rats to tank, not destroy, all the time) so it will not respawn after DT.
Drayke Hyde
8:45am 2006 Friday 8th September 2006 I think the 2nd spawn group is 3 support 1's and 2 megathrons and 2 or 3 vexors instead of 4 mega's and 4 vexors. and the 3rd spawn is 2x megathron and 2x vexor .I also believe there is a 4th spawn grp that includes the main frigate(officer) that attracts the attention of all the ships if you shoot it first at warp in. If someone can help me post a pic i took 2 screen shots to show the 3rd and 4th spawn together and then another pic of the 4th spawn ( remaining non agro ships). I could be wrong but this is the 3rd time doing this mission. The 4th spawn included 1x orion, 5x officers and 2x dominix, Each time i came back in after killing a grp i would approach each spawn group untill i got agro from the seperate groups. In the 4th spawn picture i took you can see i have the main frigate officer targeted that attracts the other ships, And i'm with in 2200m with out getting agro.
Bendax
1:36pm 2006 Wednesday 6th September 2006 One very important aspect of this mission: At least one of the five frigates initially aggroing will scramble. If you attack one of these, the whole amount of rats will engage, so be aware.
obsequious woe
Bris Vegas
1:26pm 2006 Thursday 20th July 2006 Another tip ... don't forget to notice the omber roids ... once cleared of rats it's a nice haul of omber.

Tipps. dont aggro the frigs that go aggro on you. just take a sb with you as they orbit at 1200-1500m and focus on the 2 bs attacking you. as you would aggro the frigs the entire spawn will lock on you. with sb not