Type DeadSpace
Target Destroy Gate
Steps 2
Mission briefing Now that we have the keycard it's time to send you to the third gate. Make sure you're well equipped and ready for anything the Amarr or Caldari might pit you against, because I have absolutely no idea what lies beyond the acceleration gate.
I will fit your ship with some high tech sensors of my own, just in case I'm able to spot something that you miss. Don't worry, it won't fill a module slot. Now get going! 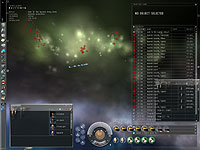 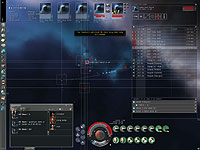 
Klabauter
9:46pm 2007 Tuesday 2nd January 2007 i solved that mission with a longrange geddon. (tachyon II) i did NOT kill the NPC's but ran out of distance, shooting the gate down at 120km. 1 wave of reinfocements arrived, but i was out of range for them and destroyed the gate before they had closed in. the NPC's in that level are very slow.
Issalzul
10:02am 2006 Wednesday 29th November 2006 Following revelations update the stargate has been weakened, I was able to kill it in about half the time. The reinforcements did not have time to spawn in.

But I have soloed it a couple of times in my megathron.

The first spawn in the gate area has 2 Imperial Ultara (apocs, lots of hitpoints) and 1 Imperial templar-something (armageddon)

Ignore those to start with, pop the sentrys.

After that, pop the armageddon. And the apocs at the end.

When you start firing at the gate, make sure you have your drones (lights or mediums) attacking it.
They dont do much damage, but they will take the aggro when the second wave spawns.

Your drones will go down pretty fast if youre not careful. So keep firing at the gate with your guns - and when your drones go down to armor, return them to your dronebay one by one, and launch them again..

That way you can keep the rats occupied, and pop the gate.

\\Doc._B
Octavian Vanguard
lshue
2:59am 2006 Wednesday 20th September 2006 Make sure you kill the gate quickly in the second stage. Otherwise you will be overrun quickly. The third spawn I got included 3 navy Jakers and something with a warp jammer.

I had the same problem. But I think the spawn was waiting for me the first time i came in. I am using an alt to boost my main and was very supprised when they easily broke my tank. most of the ships arn't even in the database at all. I am Now short a well fitted Tempest.


strange thing is I did this mission set 3 days before and it was a brease. I never saw these new ships before.
Armand Paher
3:37am 2006 Tuesday 12th September 2006 Make sure you kill the gate quickly in the second stage. Otherwise you will be overrun quickly. The third spawn I got included 3 navy Jakers and something with a warp jammer.

Attack after warp : no

ONE WCS is enough.

and the NPC's are diferent.