Type DeadSpace (combo)
Target Kill all NPC's
DropOff 30 Ship's Crew (60 m3)
Steps 4
Mission briefing Yes I have some work for you. Although the Guristas Pirates traditionally have a firm grip over the criminal culture inside our fair system of ***, the Serpentis have been poking their ugly nose in here as of late. Which is perfectly fine with us, watching the two outlawed organizations duke it out is one of my favorite pasttimes. And hopefully it will give both of their hides a good bruising, that could only work in our favor.
Now on to the bad news. An Interbus ship on a business trip to ***, in collaberation with Caldari Navy, got caught inside one of the pirate warzones. The ship was damaged beyond repair and can neither warp out nor navigate away from it's dire position. Your task is to fly into the deadspace area and rescue the crew of the ship. Please retrieve them before more harm is done, they're already scared out of their minds. We really hope this won't damage our relationship with Interbus ... the faster you get this done the better.
Oh and before you leave I'd like to give you a word of advice. When you venture into this particular deadspace area, the warpgates are not locked. This might give you the chance of avoiding most of the conflict if you wish. Good luck. 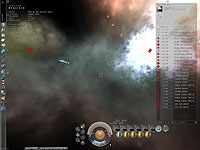 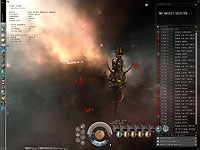 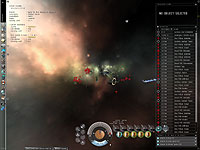 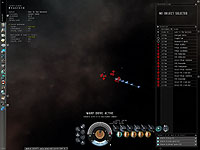 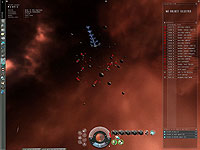 plasman
EL, Michigan
2:31am 2008 Tuesday 12th February 2008 did this mission for the first time in a while today (lost a few mates doing it previous times). did the guristas ones leaving the spies almost last. took them out cause i got tired of being webbed.

i warped out and came back to the 2nd part and an overseer worth 5 mil was there. got t2 salvage stuff worth about 15mil, a duel 250 prototype, and some guristas ammo but nothing else too great.

Rinji
9:50am 2007 Friday 21st December 2007 Had no problems with this mission in a T2-equipped Dom. Setting your drones to passive to avoid hitting the spy is key.
prokonsul_piotrus
7:25am 2007 Wednesday 21st November 2007 Serpentis Overseer worth .75m spawned in Serpentis stage when I left it to return the loot to the station. Interestingly, there were still 3 Serpentis battleships left when I left, so apparently you don't need to clear the room for it to spawn, the trigger likely is entering the room for the second time. Timewise, I was doing this as a third room, so about 1h into the mission or a little more. Junk loot.
Faith Storward
5:22pm 2007 Friday 9th November 2007 This mission can b done solo in an armor tanked Navy Apoc.
Setup as follows:-
6xT2 mega pulse 2x Caldari Navy siege missile launchers.
4x T2 cap rechargers
1x T2 dmg control 1xT2 co-processer 2xT2 energised adaptive nano membrane 2x T2 active hardners 1x T2 armor rep 1x named armor rep.
as others have allready said don't attack the spies in the second rooms take out the frigs & crusiers first while running away then the bs's

asm2750
11:52am 2007 Monday 21st May 2007 This can be done in a drake, take the Serpentis branch, you might have to warp out once or so in the second room. The main trick to do this with a drake is just to be able to recharge alot, and I do mean alot of sheilds per second. I currently have a recharge time of about 195 seconds, its possible to get this lower if you use T2 recharge rigs, and a bunch of SPRs in the lows. Only real issue with using the drake is it takes a very long time to kill battleship rats, but as long as you are recharging enough sheilds per second you can turtle though the rooms.
presidente
2:30pm 2007 Friday 9th March 2007 Easy solo in Myrmidon. The second pockets need some attention because attacking the spy ships is a bad idea: full agro.

Tactics [you need a good tank of 88% Kin/Therm and repper cycle/HP]:

2nd Pocket Serp:
- agro from first spawn
- you get webbed/scrambled immediately
- tank heavy DPS
- take down webbers/scramblers first
- take care about drones because the spy will orbit you in 5-10km [full agro while scrambled is deadly]
- take out the rest

2nd Pocket Guristas:
- go straight ahead on escape course and ignore the first spwan on the left [they will lock, web, scramble you anyway immediately]
- any other direction except upwards is deadly due forcing full agro from close 2nd and 3rd spawn then
- the Guristas DPS is hard to tank: take the webbers/scramblers out fast, and AB on distance, keep moving to lower the missile DPS ... and pray to your frakking DNA if you overestimated your tank
- take care of the frakking spy
- engage spwan by spwan

I can send out Drones at 60km. This is important tactics for combat.

Fly strong skilled! So say we all!

If you complete the Gurista's Base and let the mission run for an hour or so (few hours possibly) but do not complete it with your agent... warp back to the empty Gurista base there will be an Overseer spawn in there waiting for you. My last one I had was worth 3 million ISK just for him. Loot was not great through... but the loot is decided by a random drop table anyway.

This whole mission can be solo'd in a Raven with around 10 mill SP easily enough. All kinetic/therm, XL shield booster with Shield boost amp. 6 Cruise missiles, two heavy NOS (leach off of a BS and follow it while you pull each aggro) to help keep your cap up. 3 PDU's, one BCU and one Damage control is what I fit to solo it.

Plokk
8:30am 2007 Tuesday 6th February 2007 I have solo'd every single level 4 that caldari agents give . But WC level 4 , no way ! I think they changed this some , and the DPS is insane , and yes , those Guristas Spies in the Merlins each have +2 Scram , so you will need at least +4 worth to get out . I lost my Raven to this one , and was pretty shocked by the DPS in that room . I've had no problems at all tanking any other level 4 mission . Fly fast and kill 'em all !
XennDC
12:42pm 2007 Saturday 3rd February 2007 Ok, did it again and went through Serpentis gate. It is the easier one, and if you need to warp out of the Guristas section possibly the better idea for isk vs time spent.
Also, the Angel spy ships in there definitely don't warp scramble, so probably the gurista spy ships in the gurista section don't scramble either.
In the guristas section they can be targeted without agroing the rest of the spawn.
XennDC
2:09pm 2007 Tuesday 30th January 2007 Ok, this mission was different from what is posted. The problem is Room2 (Guristas) was 4 bunches, the first sits ontop of you (10km) and does plenty damage. There were 2-3 frigs (gurista spys) in the first bunch that made me dump a load as wasn't sure if they warp scrambled. They do web heavily, was down to 7.5m/s. I warped out immediately and back in with a warp stab. Then had to warp out once to clear the first bunch.

Managed to solo this in a Raven @ 10.5 mill sp (optimized for damage and tank, no mining skills, manufacturing skills, etc. with Dread Guristas ball control and Dread Gurista XL shield boost) The second bunch is also big dps, but managed that one without warping. Rest is easy.
Almost no drops, but bounty is quite good. No doggy agros (everything agros 1 spawn at a time), but didn't attempt using drones here.

If those frigs warp scramble, then this is very dangerous. You have been warned :
Pigasus
3:33pm 2006 Saturday 30th December 2006 In the 2nd (Serpentis) stage the first group gives you aggro immediate. In this group there are 2 Angel Spy (if I remember correct). If you shoot them you have full aggro from the whole stage.
You can use drones if you want, just don't let them to shoot those guys.
presidente
3:40am 2006 Monday 18th December 2006 Easy run in Myrmidon and Raven. Both pilots with round about 10 Million SP. Raven and Myrmidon could tank, gank and drone them down without a single warp-out.

We used the new Target option for perfect team concentration on targets.
Raven tanked most the time and Myrmidon intercepted with webber and 5 t1 heavies.

Fly strong skilled and may your DNA be with you.

Then I entered the second stage first with my tanking char, he got immediate aggro from the first spawn like is supposed to happen, I then warped my geddon in and started taking out the serpentis ships that were aggroed on my tanking char and as soon as I started firing on them the whole spawn aggroed my geddon.

Will this always happen and will I have to bring an uber tank on both of my ships for this mission?