Type Kill
Target Kill all NPC's
Steps 5
Mission briefing We received a report just a couple hours ago from our secret agents that revealed plans by our enemies to make a sneak attack against us in this very system! We believe this plan will take effect in a matter of minutes, as our surveillance teams have spotted a number of their ships mobilizing inside ***. I personally received a message from our esteemed CEO, Mervan Moritok, to send my most trusted contacts against these scoundrels, and so I ask you ***, are you up to it? All I need you to do is fly over to 5 locations and destroy all of the hostile ships you encounter, my other clients will take care of the rest. This will hopefully deter them from any further mobilization within ***. 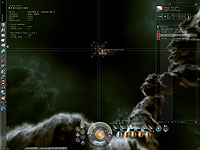 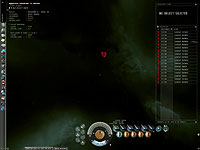 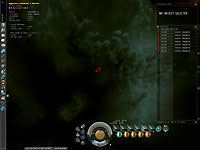 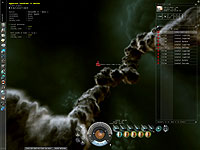 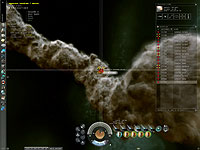 If you stand still untill the 5groups have spawned, only two of them aggro you. Then, using the tactical overlay, you can easily find the direction to take to get some distance without getting close to the other groups, and hence have only two groups to fight at once. Two of the other three groups are linked as well, which means if you attack one you'll aggro the other.

Dunno if it has changed in today's patch, but would be surprising.

Edit: just did it again. It seems, but would need to be confirmed, that they changed the aggro behaviour regarding the use of drones. After launching drones today, I got aggroed by two other groups that were 80km+ away (and same distance from my drones roughly, as I had used them on small frigs next to me). Was glad to have my 2x boost amp on my Mael to tank those 12 BSs + few cruisers ;)

Trelennen
3:22am 2007 Wednesday 11th April 2007 I got no interesting loot (the closest thing to "interesting" was a N-Type Kinetic Hardener"). However salvage is interesting, as I got like 15-20M worth of salvage!

Trelennen
1:59am 2007 Wednesday 11th April 2007 Still in the middle of it, but like wheelbarrow said, it's not too hard after the initial aggro. And even then honestly I didn't have much troubles, as I didn't have to run my booster permanently, and few enough for me to stay easily over 50% shield 50% cap. Waited for the 5 spawns to arrive, then started heading away in a direction where I would not come closer to any of the spawn (well, trying to). Had three groups aggroing me, but I guess there's one which aggroed me because I moved, as it aggroed me quite late after the other two who aggroed me pretty soon after spawning.

Anyway, I then headed away from the rats to get some distance (the closer ones were at like 25km, with frigs in it, and I'm using large artys so had to get some distance anyway (but it helps lowering damage as well). When the frigs got really close, I sent my light drones on them to rip them apart. Then waited a bit (to be sure to be far enough from the 2 non aggro groups) and sent my 5 med drones T2 on what was the closest between the cruisers/BCs and the BSs left. I stopped getting away of the rats when I got to 50km of them, as they don't do much anyway at that range (compared to close range), my damage depends on range (artys), and drones help a lot :)

My ship was a Maelstrom (with BS 4, so 30% shield boost bonus from the ship), with XL Booster II, 2x EM II, 1x Thermal II, 1x DCII, and for cap sake only 2x PDUII and 1x capacitor control circuit rig.

Attacking the first of these two groups made both aggro.

The whole mission took me 50mn.

Will list names and bounty for the members (from wallet) from the first 3 groups in an update later (might get the grouping by some screens I took). It seems their UI name and wallet name are the same in this mission.

PS: there's two Pirate Invasion with Sansha listed, one with version = RMR, the other with RMRp, it might be interesting to remove one of these two and merge their comment topics.
wheelbarrow
10:16am 2007 Monday 9th April 2007 Ok, I just did this mission, and there are now a total of 18 BS in this one room mission : Had no probs using drones, as long as there is lots of range between you and the non-aggro'd groups. Only 4 loyal minions (the only possible warp scramblers in this mission, as far as I know). Loot wasn't too bad, nothing named, but the bounties are ok, I made 9.7mill just in those, before selling loot and claiming reward. Salvaging is hit and miss, with a lot of "unfortunately, there was nothing to salvage" coming up. The only salvage I did get was from the BS. Not too hard after the initial aggro, as long as you keep good range, and tank for EM.
Picman
11:07pm 2006 Monday 9th October 2006 jansaell, there's a very easy way to solve this mission.

Spawn B in your description will attack you as soon as you warp in. If you're lucky, spawn A will also come. If not, there's a method to split them.

Next group to attack will be your Spawn D which will also pull Spawn E.

If Spawn A did aggro at the beginning, there's only 1 spawn left. If they didn't, now move towards Spawn A until they lock. Now you can shoot back and kill them without pulling Spawn C. If you release drones, the situation is different, but you will notice that : .
jansaell
11:20pm 2006 Saturday 7th October 2006 I have checked this mission as i just had it and its defenetly changed.

Mission briefing:
We received a report just a couple hours ago from our secret agents that revealed plans by our enemies to make a sneak attack
against us in this very system! We believe this plan will take effect in a matter of minutes, as our surveillance teams have spotted
ssia number of their ships mobilizing inside Inaro. I personally received a message from our esteemed CEO, to send my most trusted contacts
against these scoundrels, and so I ask you jansaell, are you up to it? All I need you to do is infiltrate an areas swarming with the pirates
and destroy all of the hostile ships you encounter, my other clients will take care of the rest. This will hopefully deter them from any
further mobilization within Inaro.

First group of ships will target and atack you directly after the warp in.
Gamesguy
2:08pm 2006 Friday 8th September 2006 This mission now has 10 total battleships inside it.

There are 5 seperate spawns. the "easy" one with just frigate/destroyers is actually linked to a nearby spawn with at least two BS's in it.LupusNoctis

Also, I found that when I shot the cruiser only spawn that the entire map agros. So be very careful there if you're in a close range setup.

Be very very careful with this mission currently. My group of corpmates and I were able to complete it without too much trouble, but I had a dual T2 large repper tank going full bore. Next time it comes up, I'll remember to grab some screens and a list of enemies.

However, if you have range(i was in a torp raven) the rats barely do any damage. The Sansha ships all have very short range, and by keeping the range open I was only getting hit by missiles, which mean my cap the entire time was at 60%+.

Definately not a good mission for someone in a short ranged setup.
fischsemmel
1:15am 2006 Thursday 7th September 2006 As of 6 September, 2006, this mission is different from what the database says. Here is how the mission was laid out as I just ran it:

The first spawn aggrod me when I warped into the mission.

It seems that spawns 2 and 3 are linked; both attack you when you upset either one or the other.

Spawns 4 and 5 also attacked me together, although it could be because I attacked the wrong spawn first. What I have labeled as 4 was farther away from the warp in point so I assumed as I ran the mission it was the last spawn. Anyway, next time I run this I'll figure out if they are really connected or if I just attacked the real spawn 5 before 4.

There are 5 seperate spawns. the "easy" one with just frigate/destroyers is actually linked to a nearby spawn with at least two BS's in it.

Be very very careful with this mission currently. My group of corpmates and I were able to complete it without too much trouble, but I had a dual T2 large repper tank going full bore. Next time it comes up, I'll remember to grab some screens and a list of enemies.
bonesbro
11:58pm 2006 Saturday 15th July 2006 The other spawns will agro drones, but their agro range is not infinite like in some other missions. However, do not be surprised if you get agro after launching drones, or if you fly near some of the spawns.

A lot of the spawns are linked, too - attacking one of them gets you agro from a second spawn.
ClogMan
11:10pm 2006 Saturday 15th July 2006 I just had this mission 2 times in a row.
Its changed compared to the current EVE info layout.
Its now one stage with 5 seperate spawns.
Only one spawn agroes you on warp in, comsisting of cruisers and frigs.
After that just take out each spawn as they dont all agro when you attack one of them.
There are 3 spawns with BS size ships, largest has 4 innit other have 3 and 2 i think.
I got a "mission completed" when i took out the "center spawn" with the largest numbers of BS'.
I launched drones on that spawn which didnt cause agro from other spawns.
My setup was:
Raven.
6 T2 Cruise launchers with Paradise and Paradise Furies. 1 Heavy NOS
2 * EM II, 2 * Thermal II, 1 CL-5 XL SB, 1 boost amp.
4 * PDS II, 1 BCS II
EM drones.
Not very hard to do.
Amazoph
1:06pm 2006 Thursday 13th July 2006 This mission seems to have changed - I lost a mega to it :(

When you warp in, all the spawns are in 1 deadspace now, instead of multiples. As a result, when I used my drones, about half the deadspace aggroed me :?