Type Kill
Target Kill all NPC.s
Steps 3
Mission briefing We have reports of Guristas Pirate ships wrecking havoc in ***! Our convoys have been attacked, as well as some outlying outposts. They seem to be intent on causing as much damage as possible. I'd like you to take care of them, pronto! And be aware that they may not all be gathered together when you arrive and if so you will be able to pick them off as they warp in to the rendezvous point. 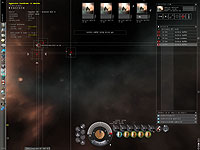 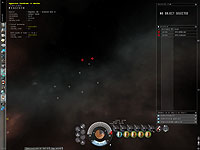 Definately NOT a good mission for drones, with the constant respawns they get targetted every other minute. I don't usually bother releasing mine.

I find the best way to finish this mission is set for max damage, tank kinetic (they spew kinetic heavy, cruise and torp), warp in at 70km(this is not a deadspace mission), then pick them off as they come towards you.

Note: don't kill all the cruisers at once, they cause the BSs to spawn. I ended up spawning pretty much everything at once.


Trojanman190
2:14pm 2007 Thursday 26th April 2007 I got the exact same mission as the previous poster. Was a little scarey at first cuz I saw amaar ships, left, refitted for em and thermal and came back. They basically fight exactly like guristas with the same damage and everything.

I also did it in an armor tanked phoon.

We have reports of terrorists wrecking havoc in ***...

It was not clear what was the enemy... Came out to be EoM.

It's an easy mission with bounties of about 10mil and the refined loot outputs minerals for more then 15mil. Considering the salvaged materials as well this makes it one of the most profitable easy missions out there.

Did it with an armor tanked Typhoon with siege launchers and heavy drones for about 40min. The saboteurs webb and scram but that was not really a problem...

Ashareth
8:24pm 2007 Monday 9th April 2007 Machida's post is nearly perfect, cause i had nearly all the same spawn, except that when i killed the last Death Knight i had an Hydra AND two Saboteurs(frigs, probably scramble).

I guess there is some chance to have that spawn.

Thanx for the rundown, it helped me a lot.:)

Having a buddy in a cap-stable shield boosting osprey makes this the easiest mission ever. Sit back and grab a bite to eat at the same time.

The cruisers are the spawn triggers. Paths found listed below.

Kill the first three battleships, then kill one Crusader at a time, followed by one of the Death Knights that spawn. Then follow along the spawn paths taking out the Battleships that spawn tanking the remaining cruisers till each EoM Death Lord is dead.

Kill the remaining Death Knight and then take on the next Crusader Cruiser...rinse and repeat

Just got a 6 mill Dread Guristas Eradicator on 3rd spawn.

just got in stage 3 a Dread Guirista Dismantler, worht 6Mio ISK plus the usual Pith Eradicator.