Type DeadSpace
Target Kill all NPC's
Steps 2
Mission briefing Its those damned rogue drones again! They never seem to get enough! This time its big. Two of our main mining facilities in the system have been completely overrun by rogue drones. If you can go clear them out perhaps we can save some of the miners and perhaps even the facilities themselves. Please don't fail me on this one, those facilities provide a large portion of both our incomes and it would be a big loss to both of us if they were lost. 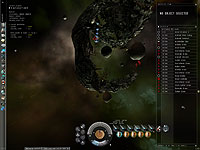 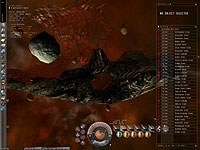 NightFox
6:03am 2007 Saturday 6th October 2007 Just completed this mission. Ore came in refined at around 6.8m and salvaged wrecks brought it 3.6m. Total combined it was close to 10m. I found it worth the time to loot and salvage everything.

Mission seemed to match the database to the best of my knowledge. Pretty easy lvl 4 and LP wise ranks with others so it's still worth a quick mission.

Trelennen
12:33am 2007 Monday 9th April 2007 This mission is really simple, but quite boring though. Started to move away from the spawns to keep range while picking them up, and didn't even have to use my booster once in my Maelstrom with 3x Invul II + 1x DCII. Never went below 70% shield...

Just a hint I got on Chepe Molon's Agentpages regarding the warps in: [list=1][*]When using the first acceleration gate, stay on the right to avoid bumping the structure on arrival (there's a possibility to get stuck, and bumping the structure triggers aggro...)
[*]When using the second acceleration gate (between the first and the second pocket), stay below and to the left of the gate, for the same reason[/list]

Xlunax
12:10am 2007 Thursday 25th January 2007 Serious loot nerfage as of this posting date. Total loot after processing was about 3M. The mission is very short, easy and gives good LP, but I don't think I'll get the loot next time.Picman

Xlunax, even after the nerf the loot is worth more than 3m. If you only loot the bs cans you will get at least 60-80 Plush compound together with other stuff. So those 5 cans alone should be worth 7-9m or so.Xlunax

DOH!! I forgot to hit the "stack" button, hence half my loot was hiding in the hangar unbeknownst to me. When I processed the rest, total loot came out to about 9-10 mil. I just got the same mission from the same agent for the second time in a row. Here's what I got the second time:
57 condensed
47 Crystal
60 Dark
205 Gleaming
33 Glossy
97 Lucent
106 Lustering
178 Motley
11 Opulent
68 Plush
193 Precious
175 Sheen

This yielded: 79K trit; 32.8k pye; 10.7k mex; 17.7k iso; 7.6k noc; 1.3k zyd; 178 meg; 20 morph which is worth about 8.3 mil ISK on this date in Lonetrek. I guess its not too bad considering how easy the mission is and how easy the loot is to collect. I bookmark the spots during the mission, then complete with the agent which allows you to warp around to collect your loot....which were in deadspace during the mission.

Picman
12:00am 2007 Thursday 25th January 2007 Serious loot nerfage as of this posting date. Total loot after processing was about 3M. The mission is very short, easy and gives good LP, but I don't think I'll get the loot next time.Xlunax

Xlunax, even after the nerf the loot is worth more than 3m. If you only loot the bs cans you will get at least 60-80 Plush compound together with other stuff. So those 5 cans alone should be worth 7-9m or so.
Xlunax
10:52pm 2007 Wednesday 24th January 2007 Serious loot nerfage as of this posting date. Total loot after processing was about 3M. The mission is very short, easy and gives good LP, but I don't think I'll get the loot next time.
woodstok71
4:00am 2006 Tuesday 31st October 2006 Another thing, this is the way i do it fyi

If you go and mine the things leave jetcans, make sure you make a new one and transfer everything before you move. Mine at another spot with a new jetcan until an hour goes by, you should have a good amount by now. Bookmark location, complete mission, fly back to cans with hauler and pickup. You avoid having to warp to thru jumpgates when retrieveing and go straight to can when doing this.

So, roughly 15.3M in minerals dropped.
FreeHansje
9:36am 2006 Saturday 7th October 2006 But I am not rich, just started with lvl 4 missions, and some of them are very hard for me. Only recently I read up about tanking & hardeners... :

So the drone missions I can do easily, and since I have 2 lvl 4 agents in-system... I'll wait out this dronemission and get other missions from my 2nd agent. Don't know what to do if SHE offers me a dronemission as well... :D
Picman
9:20am 2006 Saturday 7th October 2006 It used to be around 25m worth of alloys before they nerfed it, now it's worth 10-15m. You can do the missions within 20 minutes.

You'd need some nice lvl 4 agents in near systems to farm missions, otherwise you'de be sitting around waiting for the next downtime so that you can continue. And even if you've got 4 agents you could earn max. 60m per day collecting drone loot. I'm sure a good lvl 4 mission runner can earn more if he just completes the mission and continues, because you get rewards, bonus, more loot and last but not least your LP for agent offers.

But it's your decision :D .
FreeHansje
1:07am 2006 Saturday 7th October 2006 Tnx for the answer. It's just so much, it runs in the millions per taking out the drones. Monetary the mission is no big deal, but again, the loot...
Picman
11:17pm 2006 Friday 6th October 2006 You can farm the mission. Don't accomplish the mission objectives, means don't touch the drone bunkers in stage 2. Then the drones will be back after each downtime. I don't farm missions anyway, just finish and loot them, then go on to the next mission. However, you can. That's why they reduced the loot in drone missions : ....
FreeHansje
11:05pm 2006 Friday 6th October 2006 Question: I think I have read somewhere, that you could harvest this mission? Like going in, take out the drones, return later and they are respawned again? So you can take loot and loot again?

Tnx
[RID]FRENZY
Nottingham, UK
6:50pm 2006 Wednesday 4th October 2006 Just aggro the first two groups after you have set a course to fly away from the drone structure, kill what is closest first and you will pwn the mish easily.

The drone controllers do hardly any damage beyond 30k
Mystkyller
1:29am 2006 Saturday 19th August 2006 the drones seem to change each spawn now if your farming the mission be aware that you won't face the same one's each time it respawns at DT.

Also past 40km you don't agro everything at once. I fly out to 40km+ from the nearest drones and take out those irrating drone structures, then you can easily get each spawn solo most of the time.

If your in a good tank you can agro the first 2 spawns and use EMP Smartbombs to take out the Scrambler drones to make the rest of the mission doable solo.
presidente
10:43pm 2006 Thursday 27th July 2006 This mission is dealable with a well fitted BRUTIX and good skills. A Medium Armor Repairer II is a must. Just the Drone Controllers forced me to warp out 4 times at the end.

Presidente Gallente
FenikSar
7:02pm 2006 Sunday 23rd July 2006 I did this mission in a domi with 82 em, 10exp, 72 kine, 84 therm resis and was doing fine till i hit the last stage and encountered the Drone controllers and they began hitting me for 100-120 dmg( they where close to me 10k) this i couldnt tank so i re-fitted to a exp hardener and they then hit for 50ish so just a warning to watch for the exp damage. Also with the domi when you engage one group they all attacked me.