Bring back the evidence [ comments: 0 ]

Type Kill
Target Kill all NPC's
DropOff 1 Reports (0.1 m3)
Steps 1
Mission briefing There has been a lot of talk in the local media about a high profile case involving an infamous drug lord who goes by the name of Gabriel. It was alleged that he had an officer of CONCORD assassinated last year, but due to insufficient evidence the charges might be dropped. However recently some evidence has emerged which may influence the outcome of this case, and Caldari Navy was entrusted with bringing that evidence to the station where the court proceedings are being held. Unfortunately the freight ship transporting this evidence was ambushed on its way there. We believe Gabriel may have hired a group of Guristas pirates to do the dirty work. We spotted a group of them not far from where we think the ambush took place and would like you to head out there and investigate the area. If you find them, destroy their ships and bring back anything you can find from the wreckage to me. For completing this job I'll give you *** credits, plus some extra cash for doing this within the hour. I will only give you 24 hours to do this however. 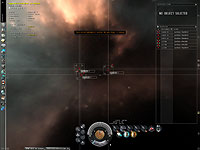