Type Kill
Target Kill all NPC's
DropOff 20 Prisoners (20.0 m3)
Steps 1
Mission briefing We currently have a rogue slave trader on our hands, ***. The Blood Raiders have apparently dispatched a group of their own to *** to look for potential victims. They've been raiding outlying settlements, which have weak security systems in place.
Our primary objective right now is to get back the people they've taken captive. We think we've located their slave pen in ***, but it's your job to make sure. Destroy the structure and rescue the slaves if you can, then report back to me. We'll deal with these slave traders later. 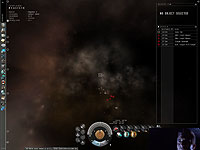 After I started shooting the slave quarters, got:

1 Corpior Fanatic (according to my wallet journal.. I thought he was a Blood Raider Slavetrader in overview)

then after a wee while, 5 minutes
1 Corpior Exorcist

only got 138275 isk for the Exorcist but that might be down to my corp tax.
also yeh, veld roid only in this one.