Type DeadSpace (no gate)
Target Kill all NPC's
DropOff 1 Gallente Light Marines (2.0 m3)
Steps 3
Mission briefing We've had increasing reports of hostile activity within our borders in the past months, and I've been ordered to take a look into the matter. One of these reports came from a group of miners scouring the Veldspar belts in the outer regions of ***. They claimed to have seen a large ore convoy heading away from one of the belts, consisting of ships which appeared to be of Gallentean origin. Their escort attacked them immediately, but they escaped unharmed. My best guess would be that these hostiles are in fact pirates, but what intrigued me is that their ships did not appear to match the description of any pirate organization known to infest ***.
I want you to take a look into this, ***. Fly to the asteroid belt where the miners were attacked. Wait there for a while, and see if any hostiles show up. If they do, destroy them but try to take back someone from their ranks alive for questioning. 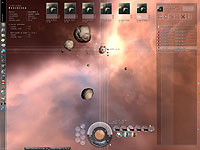 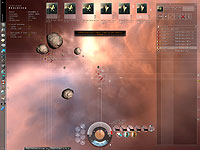 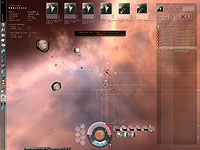 There appeared to only be two spawns - first the miners, and then the combat ships. There was no Thorax spawn.

Dagrin
7:29am 2007 Saturday 13th January 2007 Why does it says to use thermal damage when it clearly shows EM for shield and explosive for armor?galeb

Because Thermal is almost as good as em on shields, and only slightly inferior to explosive on armour...so it's the best ammo to use if you don't want to waste time swapping ammo.

You're right individually...just thermal is a bit more time-efficent overall.

EDIT: This is also an encounter missison.