Type Kill
Target Kill all NPC's
Steps 1
Mission briefing We received an unusual offer today, ***. A transmissions coming from a pilot supposedly flying a Sanshas Nation ship was sent directly to my office. In it was a detailed graph of one of our outposts in ***, with a red marker at 10 different locations in the inner structure of the installation. The sender claimed to have planted a bomb at each of these locations, boobytrapped of course. He threatened to detonate the bombs if his demands were not met.

And there's more. His demands were quite out of the ordinary, he requested that a specific pilot working for us meet him at an undisclosed location within *** for a duel. As soon as he receives notification of his offer being accepted, then he would send us the coordinates of the meeting point. He did not specify why he wishes this duel, simply stating that the pilot he mentioned is a famous veteran who has acquired a sizable bounty on his head in various parts of the galaxy, as well as being notoriously skilled. Defeating this pilot would bring him fame and glory ... and money of course. He also demanded that this pilot face him alone. You may have guessed it already, but this pilot is you my friend.

Now I am not entirely sure this man is telling the truth. But he's traveled all the way from the Sanshas Nation stronghold in 37S-KO, so he might just be desperate enough to pull this off. I will give you two options, face him alone, or decline the mission and we will take the risk of attempting to deactivate the hidden explosives, if they really do exist. It's up to you, ***.

This is an important mission, which will have significant impact on your faction standings. 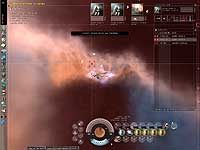