Type DeadSpace
Target Kill all NPC's
DropOff 5 Prisoners (10.0 m3)
Steps 1
Mission briefing I just received news of a very grave incident that just occured in the system *** a few hours ago. A convoy carrying our esteemed CEO was ambushed by an unusually large and organized pirate strike force. But fortune shone on us tonight, for due to the extraordinary bravery of our CEOs valiant escort team, he managed to escape unharmed, although slightly traumatised as you might expect. We lost many good men in this unfortunate incident, including the commander of our escort team ... may he rest in peace.

Now I'll get right to the point. We believe the pirates managed to capture some of the crew of the cruiser which was escorting our CEO, as we found the wreckage of their ship close by the encounter location, lacking the bodies of most of the crew. Caldari State special forces have been called in and are scouring the area for any traces left behind by the pirates, which so far remain at large. We'd like you to help out in the investigation. We know of a popular pirate hideout in ***, please search the area for any clues left behind. 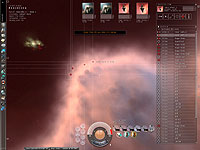 Devec
The Netherlands
11:22pm 2007 Thursday 12th July 2007 The name of the missions has been changed to Kidnappers Strike instead of angel strike
Xargon
10:36pm 2007 Saturday 13th January 2007 the hard part is the thing dumps you on top of the guys and they start wailing on you right away. I tried in a cruiser, but probably need a better one.
Dahak
4:37am 2006 Sunday 27th August 2006 Mission unchanged.