Type Kill
Steps 1
Mission briefing We got reports of a Guristas Pirate patrol in this sector. Our surveillance patrol reports they are scouts providing intel back to their leaders for a much larger raiding party. We cannot have them discover our weak points or gather any intel on our convoy travel routes. Teach them a lesson for us, ***. 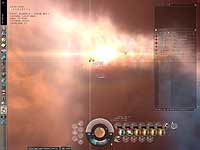 The spawns are linked, fire at one and both attack. So really, one spawn

The Pithatis Enforcer is the ship you kill to finish the mission.
Floydan
Sweden
4:53pm 2006 Monday 4th December 2006 I'm glad someone else posted about the error, I was abit baffled when I warped in yesterday to find all the NPC's

If i get the mission tonight I'll make sure to include the second step's rats and images if I remember it =)
bpdlr
2:26pm 2006 Sunday 3rd December 2006 Ah, I forgot now I can check the wrecks to see what I've killed!

All attack at the same time (1 spawn)
bpdlr
2:23pm 2006 Sunday 3rd December 2006 There are many more rats in this than the description says, and there seems to be a 2nd room (doing it now, haven't been there yet).

First room is about 4-5 Despoilers, 2 Renegades, some Ascribers, Silencers, a Nullifier and a Murderer.

If I get the mission again I'll post a detailed report.