Type Kill
Target Kill all NPC's
DropOff 1 Data Sheets
Steps 1
Mission briefing A bold thief just got away with an audacious burglary at the system ***. He stole documents of critical importance to us - he probably intends to sell them to one of our rivals. These documents must be returned to us as soon as possible and I think you're the person for this job. We have the approximate location of the dastardly thief and I want you to go there and take care of him. Once he's been dealt with return the documents to me. I suspect he will ot linger long in his current location, so you must hurry before he gets away. If you complete the job within the hour you'll get a cash bonus and a splendid piggy bank as an indication of our gratitude. 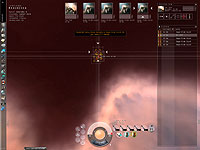 epaistete
8:22pm 2007 Wednesday 28th March 2007 Neither the telescope or its launch pad drop anything
Philomoprh
11:18pm 2007 Monday 5th March 2007 As of March 5, 07, the commanders are shooting Scourge missiles. Still only 5 of them.
SSgt_Sniper
8:23am 2006 Friday 8th December 2006 Mission info is way way off. I fitted the recommended expl, kin, em, then watched ten Merc Commanders spam widowmakers and what I like to call L-A-S-E-R-S at me.
Anticon
Adelaide, Australia
12:39pm 2006 Thursday 7th December 2006 As of Dec 07, only 5 Merc Commanders are with The Thief. It's a bit too easy now, knock off 1 and the rest are cream.
Creat
9:06pm 2006 Tuesday 5th December 2006 I noticed in the patch notes for today's patch (here) this mission is mentioned:
The difficulty for the mission 'Stop The Thief' has been adjusted.

so it's probably changed now once again...

'Ok, our security is beginning to get annoyingly incompetent around here, not only did this thief get away documents of critical importance to us, he also stole my clothes, my shuttle and my lunch! He has done this before and we found he intends to sell them to this crazy scientist who's trying to be a rival of ours from his radio telescope garage. These documents must be returned to us as - again - as soon as possible. We have the approximate location of the telescope. Return the documents to me after you get my lunch, uhm, I mean my documents back. If you get my lunch â€¦ I mean the documents back within the hour you'll get a cash bonus and three more of our splendid piggy banks as an indication of how many piggy banks we could make with these documents.'

As for the npc, they were like allready mentioned, 8 mercs and a thief. They pound really hard, so a note on that.

Ikkajo
Seattle, WA
9:21am 2006 Saturday 2nd December 2006 Just completed it. Same - 8 merc commanders. They all spam heavy missiles. It hurts when 9 all hit at once because they all lock onto you simultaneously. That's a lot of damage!
Ghan Tylous
Denmark
6:27pm 2006 Friday 1st December 2006 Got Stop The Thief.

It have 8 Mercenary Commanders + the thief post Revelations. So it have changed
Creat
12:01pm 2006 Thursday 30th November 2006 This mission has apparently changed significantly, mabe just with the revelations patch, or I took a wrong turn somewhere... Thiss appears to be the level 2 version of the mission.