Type Kill
Target Destroy all NPC's
Steps 1
Mission briefing We spotted a few Blood Raider ships roaming about near here, ***. We believe that they are part of a reconnaissance force, sent to scout for weakness's in security, probably in preparation for a raid on one of our outlying settlements in ***. We sent a few of our best men out to intercept them, but none of them have returned. Our surveillance team caught sight of them again recently, and decided to wait for someone a bit more competent before we blow their cover again.

I'm hoping you will be up to the task of taking out these scoundrels. They are led by an infamous captain, which you may have heard about already. Her name is Uleen Bloodsworn. Do not underestimate her, many have done so in the past and paid the ultimate price.

Now get going, before we lose sight of them again!

This is an important mission, which will have significant impact on your faction standings. 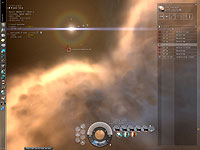 prokonsul_piotrus
9:35am 2007 Monday 26th November 2007 Uleen can drop faction loot, I got armor hardener. But her wreck is generic, so no good salvage.
harrier
5:46pm 2007 Tuesday 30th January 2007 i jsut don the mission and i didnt come up against blood raiders, but angels emm ill get wat ships i came up agenst later im feeling lazy
Hal Seldon
5:22pm 2006 Monday 16th October 2006 Does exist in a Serpentis variant as well:

Mission is very easy for a lvl3 one, could do it with a Catalyst warping out one time. It is an Encounter where you can warp in 100km away - out of range of the Missile Battery. :)