Type DeadSpace (no gate)
Target Destroy all NPC's & Prison
Steps 1
Mission briefing The Seven have showed their ugly faces again, in ***. They've set up a prison facility where they keep captured personnel working for Caldari State and random civilians for a ransom. The people that are put in there are rarely the same after they've been released. The Seven have somehow managed to get a hold on Sansha mind altering gadgets, which they use on those who they kidnap to erase their memory among other things. Rarely does this not have serious side effects ...
I want that place shut down, immediately. Do whatever it takes. 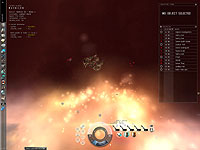 Took out all the structures and didnt get anything but some mining laser crystals...

I have just completed this mission

I also did not have to destroy the prison to win the misison.

My skills are low so I warped into 60K took out the Grunts and 1 Angel Sentry - warp Out then in again and took out Deathguard and then another Sentry - In again took out last sentry and Olufami - in again and AB close to assasin webbed and then Pulsed with MFs.